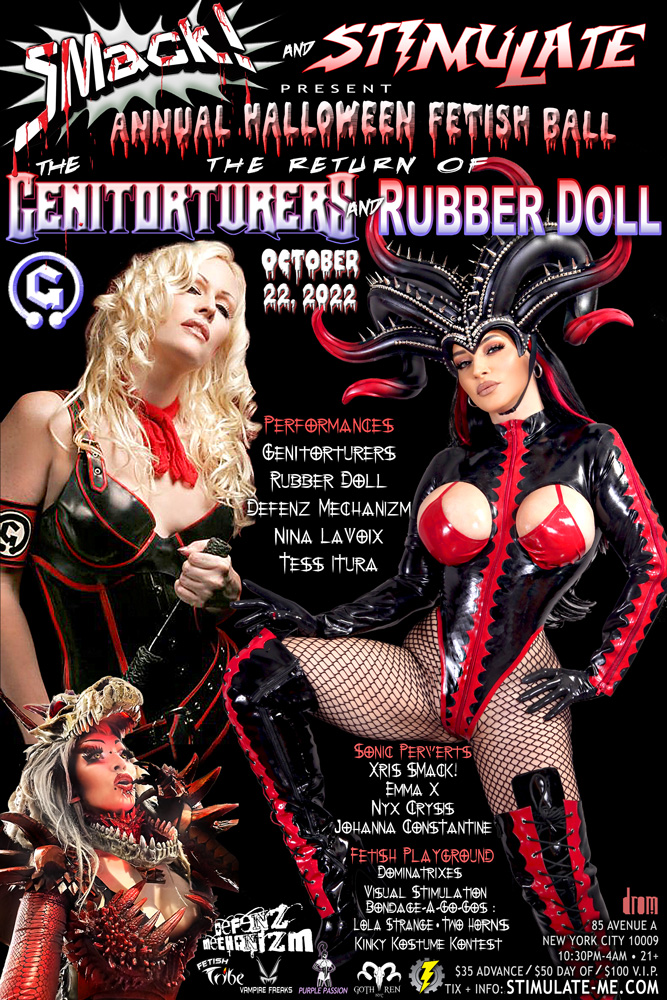 STIMULATE + SMack! team up to present the Annual Halloween Fetish Ball – this year with the Long-Awaited return of THE GENITORTURERS!

PLUS
we added the amazing RUBBER DOLL too!
a night not to be missed!!
the final date on their 2022 Tour,
the Genitorturers first played for SMack! in 2004, and we’re XXX-cited to have them back!

MUSIC by our SONIC PERVERTS

“Since their 1993 IRS Records debut release of “120 Days of Genitorture”, the Genitorturers have celebrated the unspeakable, embracing and exploring our conservative culture’s taboos.
Renowned for their status as agents provocateur of the underground hard rock and industrial metal scenes, the latex defining and pop-culture defying Genitorturers have released many albums, ep’s and singles, such as “Flesh is the Law“, “Sin City” “Devil in a Bottle” to an incredible remake of the Divinyl’s hit “Touch Myself” produced by Dave Ogilvie (Skinny Puppy, NIN) and Rob Zombie producer Scott Humphrey.
Their live show is not to be missed!”
facebook.com/Genitorturers
music.apple.com/us/artist/genitorturers/29732442
Genitorturers.com/

“RubberDoll is an internationally known fetish model and elite stage performer with a unique style that combines cutting-edge kink with sultry sex appeal. She has established a reputation as one of the most explosive and sought after live performers on the fetish and adult club circuit. She has performed all across the globe, with appearance at all the top fetish events in the US, Europe and beyond. She has appeared live with German industrial rockers, Rammstein, and she is a staple at adult conventions, such as Exxxotica. On stage, RubberDoll’s one-of-a-kind shows are erotically charged and filled with sexy surprises that include extreme fetish outfits, magic tricks, humor, and outrageous visual effects.”
http://RubberDoll.net
facebook.com/FanPageRubberDoll
instagram.com/RubberDoll